Back in July, we did a presentation for the principal of our old middle school (along with other principals from the district). We were happy to hear a couple months later that they were incorporating robotics into the school’s 6th grade curriculum and starting an after-school robotics club. One of the school’s engineering teachers had been trying for a few years to start the club and he was very excited when he found out that the school was finally letting him do it after hearing our presentation.

We met with him on a Tuesday after school without really knowing what he had in mind for the club. When we arrived, we found that the club was already in session. Mr. Depies showed us the Tetrix kits he bought and we took the opportunity to explain servo and DC motors to the students. The participants were split into groups of 4, each building a Tetrix PushBot. Since they had already been meeting for a couple of weeks, they could build it on their own and we talked to Mr. Depies while they worked. 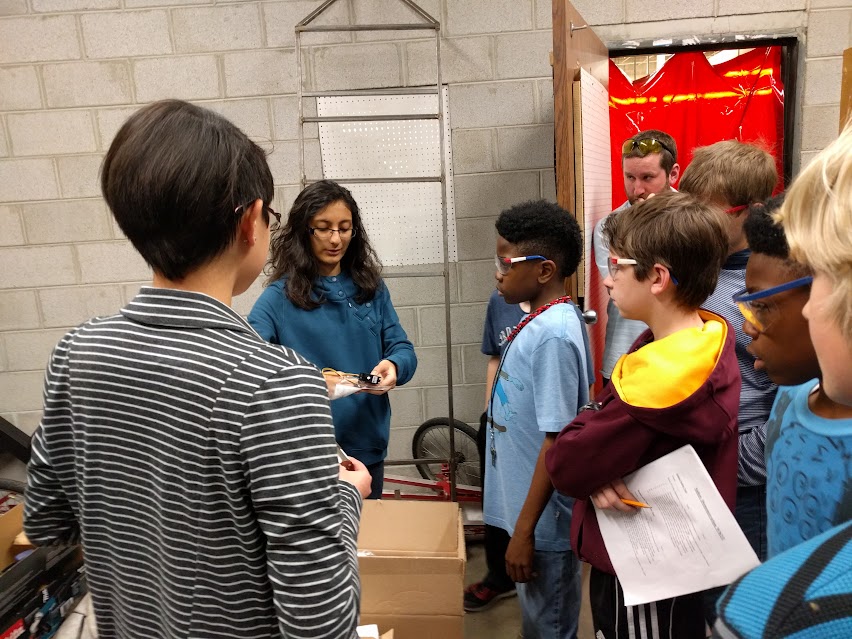 He explained the situation to us: he and the other engineering teacher had been collecting tools/machinery like metal chop saws, welding equipment, etc. for years. They had been trying to incorporate them into their classes (as we remembered from our 7th and 8th grade engineering classes), but didn’t have the funds or permission from the school to do anything really cool with them. The principal finally let Mr. Depies buy dozens of VEX Robotics kits for the 6th graders this year, hoping that the robotics class will spread to 7th and 8th graders by next year. We were very excited to hear this news, especially since robotics in school is a huge step towards full support of FTC teams at the school. He also explained to us that he would love to let the high school robotics teams come to his workshop. He wanted to create a “family” between the high school teams and the middle school’s robotics club students. We think this sounds like a really fun idea, and since our high school doesn’t support FTC or have a high-quality workshop, it would be a great opportunity for the FTC teams at our school.

It was a lot of fun to meet with Mr. Depies and hear the ideas he had for the future of robotics teams/clubs at the middle and high schools. We will be contacting our school’s FTC and FRC teams to let them know about the opportunity and we can’t wait to see how it goes forward!