One of our favorite types of outreach is when we do demonstrations with other teams – and with the opening of the new Shoreview library, we had just that opportunity. We were invited by the Mustybots (Mounds View’s FTC team), as well as Height Differential (FTC team) and Knightkrawler (Irondale’s FRC team), to join them at the library’s grand opening. We were also joined by The LEGO Shark-Phins (FLL Jr. team) and two FLL teams: The Wylde and The Dots. With all seven teams present, we represented all four levels of FIRST teams from the Mounds View School District. It was awesome.

Space was tight, so we spent most of the time walking around and talking to interested onlookers. Many of them were from the Mounds View District and had heard of at least one of the programs before. This was a great way to provide a visual explanation of each program and show that kids of all ages could be involved in robotics. Because there were so many young children at the event, we would usually end up briefly talking about our robot and FIRST before redirecting them over to the FLL Jr. table.

About every 45 minutes, we turned on the robots and told our visitors to stand back. Posse member Nancy led most of these demonstrations and took charge of explaining each program to the crowd. Since the FTC and FRC robots weren’t allowed to run with people crowding around them, we took the opportunities of an open space to show what they could do. Our team and Height Differential would spend about five minutes collecting and shooting balls into the center vortex structure, which the audience really enjoyed. Then, Nancy would turn it over to the FRC teams and the Mustybots would briefly drive their t-shirt cannon robot. After both teams were finished demonstrating, we would invite everyone in the crowd to our upcoming competitions and thank them for watching. These short demos were always a great way to engage the audience and show what the robots actually do. There were many times when kids didn’t understand what we were talking about, but right after they saw the robots run, they came back to us excited to learn how everything worked.

We’re very grateful to the other teams for inviting us to the event and had a lot of fun connecting with our local community throughout the day. This demo was a great introduction to the Shoreview library and we’re looking forward to visiting many more times in the future. 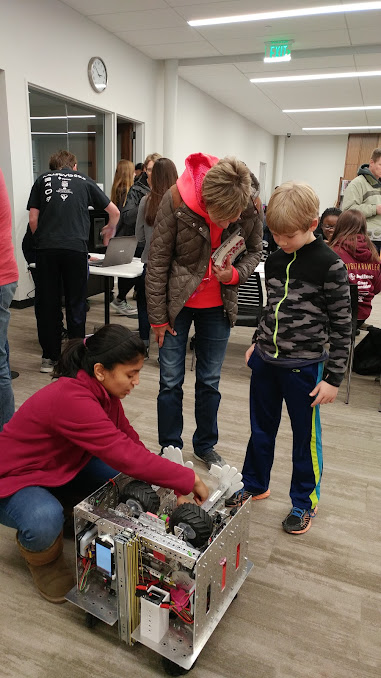