The Minnesota FLL State Championship is our favorite day of the year. We love volunteering at FLL tournaments to give back to the organization that has opened up so many opportunities for us. State in particular is fun because of the large size and high possibility of dance parties.

When we arrived, we were excited to find FTC friends from teams Height Differential and Polar Vortex were also volunteering. 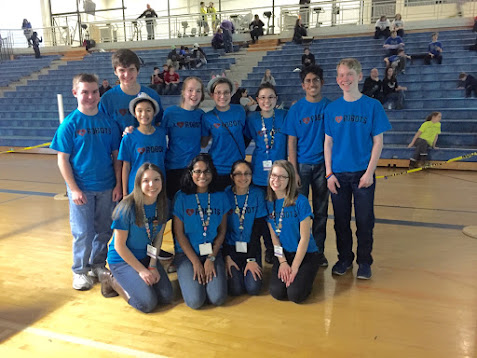 Our experience at the performance area check-in table last year was super fun, so we were looking forward to helping with HD with that later in the day – but first, we were assigned to the FLL Jr. expo hall.

We barely knew anything about FLL Jr., so we were looking forward to seeing what it was all about. Our jobs were to run activities for the kids (and their younger siblings) when they weren’t being interviewed by judges. One of the jobs was to run EV3 Mindstorms LEGO robots on the ground near where the interviews were taking place. The FLL Jr. participants (and their younger siblings) had a chance for hands-on playtime with FLL robots built by High Tech Kids. The other half of the team ran a coloring table, where the kids (and us) could color pictures of LEGO Minifigures. It was a lot of fun to talk with the FLL Jr. students and their parents. We were excited to find that most of them were planning on joining FLL when they were old enough and it was awesome that we had a chance to help inspire the next generation of FLL teams.

After the expo ended, we went back to the performance area for the much-anticipated Head-to-Head competition. We spent our time running around and helping HD find teams for check-in, as well as having occasional dance parties with the PVT pals. When Head-to-Head was finished, the pre-awards ceremony dance party commenced. A train began and made its way to the upper balconies. When that became too much of an annoyance to the people upstairs, Nancy ran to the DJ and requested the Cha Cha Slide. We and the other FTC volunteers gathered on the ground and encouraged the kids to join us.

When the awards ceremony finally began, we were thrilled that Fantastic Four (a team we’ve known since our early days in FLL) earned second place overall, meaning that they qualified to compete at the North American open in LEGOLand California. We took the trip a couple years ago, so we knew how much fun they would have and offered to give them advice to prepare. The Diamonds, a team mentored by HD, won first place and the opportunity to compete at the FIRST World Festival. It was really great that the top teams were ones that we knew and we were very proud of how far they had come.

FLL State is always an amazing opportunity for us to volunteer with the people who we’ve grown up knowing through FIRST. We plan to keep volunteering for as long as possible and we’re already excited for next year!